2018 got off to a whirlwind start as I found myself once again at the AllTech Arena to defend my World Championship of Colt Starting title at the Road to the Horse 2018. Three challenging rounds, one obstacle course and plenty of patience later, I took out the World Championship title once again. 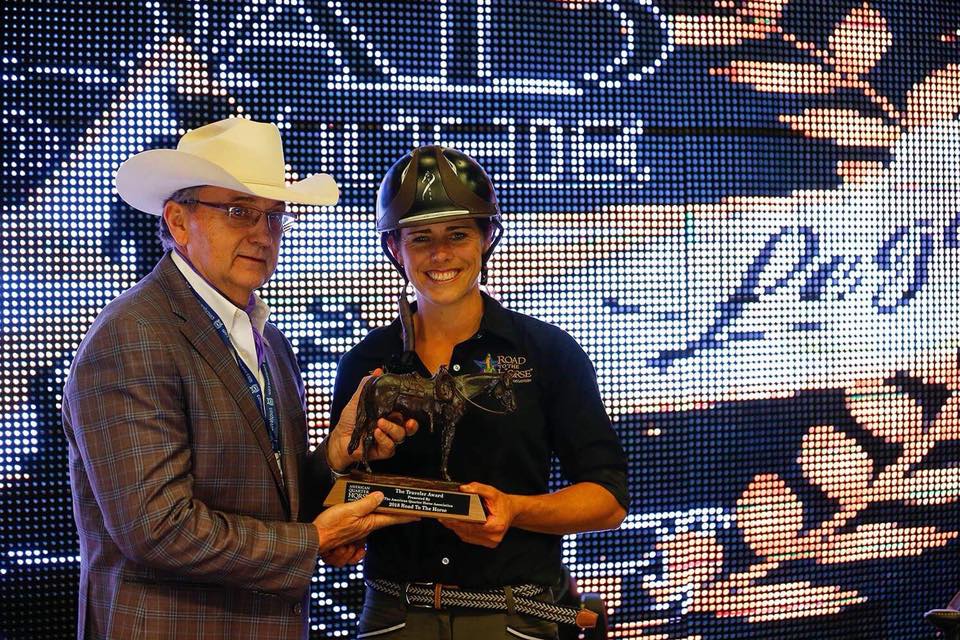 So it was with a deep appreciation and fervent anticipation that I once again found myself back in Kentucky, USA for the Road to the Horse 2018. This time with a twist: for the first time in Road to the Horse history, we were starting two colts simultaneously. Adding to the mix, I was up against two other Road to the Horse champions - Dan James of Australia, and Nick Dowers of America. Still the only Kiwi, this time the only woman.

The competition began with the selection of two colts from the Road to the Horse remuda. Each competitor was required to complete three working round pen sessions over the course of a weekend. The colts were then guided individually through the challenging fourth round – the famed Road to the Horse obstacle course.

Round One: Instinct, Trust and Personalities

Speaking of twists, day one of the competition got off to an interesting start. After two days of assessing 12 horses, our options had dwindled down to just seven, the other five having caught colds after braving a snow storm en route to Kentucky. A surprising start but a welcome challenge nonetheless.

With the previous days’ evaluations now out the window, I found myself without a game-plan, relying instead on my instinct to make the call for me. My first selection was a bay roan (Kiwi) who approached me, reached out and made contact - the very first human contact for this colt. He made the choice for me, despite not being in my top six a mere hour before his selection. In the second selection round, all of the remaining horses in the pen approached me. I made an impromptu decision for my second choice -  a beautiful chestnut with a big white blaze. I named him NZ, pronounced Enzee. He appeared healthy, tough and I knew he’d last the distance.

Day one was about being patient and adjusting to two very different personalities. I worked with both colts interchangeably, allowing them plenty of rest between our work, and plenty of time to mull things over. Alternating between the two colts, I worked to gain their trust.

Kiwi was sensitive but brave - ten minutes into Round One he was starting to understand the basics of leading. After a brief interlude and one hour into the first round I was walking him bareback around the arena. Sensing he wasn’t ready for a trot, I returned to groundwork: I taught him to stand while being brushed, pick up all four hooves and wear a surcingle, all without bucking (the only horse so far that hadn’t). Following another break and 90 minutes into Round One, he trotted and cantered the pen with no issues.  The magic truly happened when he followed behind me as I introduced NZ to obstacles, his innate curiosity keeping him constantly engaged. In no time at all, I was trotting and cantering Kiwi under saddle.

Things became difficult once I attempted to saddle him. Although he didn’t bronc, he did buck. I removed the saddle and checked him over, doing some body work to ensure he was physically sound before resaddling him and continuing with ground work. With 15 minutes remaining, I was riding him under saddle, breaking into the first stride of canter (albeit a wobbly one) with just five minutes to spare.

I ended Round One in second place with 492 points, only 12 points behind Dan and Nick who had tied first with 504 points each. This was the closest score in the history of the competition.

The game-plan for Round Two was to work off each horse’s strengths: NZ became confident and brave in the presence of Kiwi who, in turn, gained much forward movement from NZ’s lead. It was amazing watching the horses work together, each horse enhancing the other’s qualities.

Baby Steps out of the Pen

Kiwi started right where he left off; riding with a saddle twenty minutes into Round One. In less than ten minutes he was cantering, following off the lead of NZ who was loose in the pen. Once Kiwi was walking, trotting and cantering in both directions independently, I opened the gate so he could ride outside, the extra space being crucial to his forward movement. His canter got a little fast at one point, but after some time to relax and explore the arena, his confidence increased and he became noticeably more relaxed.

I eased into my work with NZ, spending 10 minutes checking him over and doing body work so as to continue the physical progress he’d made the day before. He settled soon enough and began to work freely, saddled and in the circle. With obstacles already scattered around the arena, he began jumping over barrels and ducking through the cowboy curtain. Within minutes of mounting him, he was trotting happily around the pen. It was then that he had his first real canter, making a full circle around the pen. I seized the opportunity to move into the larger arena; his trot was relaxed, his canter a little unsure as he rounded his back and froze suddenly. After a few reassurances and some time to walk slowly around the ring, he became confident transitioning between paces and was cantering happily.

A Brief Introduction to Obstacles

The pen is both a classroom and a playground. It is crucial to let a horse explore and have fun.  Both colts were enjoying the questions being asked of them, learning that it could be fun and relaxing to find the solution. The colts learned to navigate the tarp and poles in Round One, so the challenge for Round Two was to repeat the process.

Using an assortment of colourful objects, I watched as Kiwi began lipping and pushing things before letting NZ, more timid in nature, join in. Kiwi successfully navigated the bridge without question, the chestnut following along on the outside. Soon Kiwi was being ridden through all the obstacles that he’d completed on the lead rope, including dragging a giant horse teddy around the pen. Having exceeded my expectations, I dismounted and unsaddled him, returning to NZ with just 15 minutes left on the clock. I did much of the same with the chestnut who was incredibly brave now, having gained an immense amount of confidence as Kiwi’s spectator. Although slightly cautious, he tried everything asked of him.

Compulsory rail work consisted of a walk, trot and canter in both directions, pick up all four hooves, mount and dismount, rein back, turn 180 degrees to the left and right and lead the horse.

Prior to rail work we had 20 minutes in the pen. NZ started out a little unsettled. I spent half the allocated time brushing, saddling and bridling him, before lunging him in both directions.  He trotted and cantered smoothly under saddle.

As we rode into the arena, the chestnut tensed, unsure about the crowds. His first declared walk was unsettled. He delivered a few solid trots and canters before coming to an abrupt stop, freezing right before the final canter. I assumed he was unsettled by the atmosphere and being isolated in the ring, but it quickly became apparent it was more than that. After dismounting and leading him he started to move again although clearly agitated.

My Kiwi Kid proved a smooth starter. Our work in the pen was solid enough that I elected not to use the allocated 20 minutes and entered the arena early. Apart from breaking stride in his walk on the left rein and the canter on the right, he aced his rail work.

Round Four: The Obstacle Course

NZ wobbled through the first of the bending poles and was hesitant approaching the second. He was noticeably out of character compared to his confidence and bravery the previous day. I removed his bridle and elected to continue the course with just a halter.

The transformation was immediate. Flicking an ear forward he boldly walked through the second obstacle, which he’d balked at only moments before. His relaxation and curiosity returned tenfold, and he navigated the rest of the course boldly and with ease.

Mystery obstacle one was a giant castle, with a real-life princess in the tower. We were scored on how close the horses could get to the door. NZ strolled right up to the door and pushed it with his muzzle earning us full marks.

Mystery obstacle two was a giant cake which started rising from the ground to reveal two-meter tassels. Every other horse had to wait until it was stationary before approaching. Only two of the other horses had completed this mounted. Once again, NZ had no issues, making a beeline towards the cake he immediately began playing with the tassels, peeking his head inside as it continued to rise. The moment the cake came to a halt he was underneath it, turning a full circle and coming out again.

With 11 minutes to go, it was time for freestyle. As we cantered a full lap of the arena I raised my hands in the air, topping it off by standing in the saddle and leaping off him. I was truly proud of my once timid NZ - he was clearly trying to tell me something that day. I listened, and it paid off.

Kiwi was his curious, relaxed self; eagerly approaching everything in front of him.  He showed no fear as he moved through the course, and like NZ, he was only two happy to approach the most challenging obstacles, finishing with 17 minutes left on the clock.

And the winner is...

The results were tallied using the cumulative score from both colts. I rounded off day three with a total score of 3032, followed by Dan on 3002 and Nick on 2737. When they announced my name, the stadium erupted and fireworks went off. To be acknowledged for my horsemanship against two of the world’s top horsemen was truly a life defining moment.

It’s been a lifetime of learning to get me where I am today. I started my first untouched pony at just nine years old and I’ve worked with thousands of horses since. I am always first and foremost a student of the horse, always learning from them and evolving with them. I was unable to take my two colts home with me to New Zealand, but I am truly grateful for the trust they placed in me during this competition.

The founders of the Road to the Horse, Steven and Tootie Bland, started this competition to spread a simple message: build trust with your horse and be amazed how much more both of you will accomplish. The relationships I have built and the success I have achieved with all of my colts, both this year and last, are a true testament to that message.